S&P DOW JONES INDICES MAKE NO EXPRESS OR IMPLIED WARRANTIES, AND EXPRESSLY DISCLAIMS ALL WARRANTIES, OF MERCHANTABILITY OR FITNESS FOR A PARTICULAR PURPOSE OR USE OR AS TO RESULTS TO BE OBTAINED BY US, HOLDERS OF THE NOTES, OR ANY OTHER PERSON OR ENTITY FROM THE USE OF THE SPX OR WITH RESPECT TO ANY DATA RELATED THERETO. WITHOUT LIMITING ANY OF THE FOREGOING, IN NO EVENT WHATSOEVER SHALL S&P DOW JONES INDICES BE LIABLE FOR ANY INDIRECT, SPECIAL, INCIDENTAL, PUNITIVE, OR CONSEQUENTIAL DAMAGES INCLUDING BUT NOT LIMITED TO, LOSS OF PROFITS, TRADING LOSSES, LOST TIME OR GOODWILL, EVEN IF THEY HAVE BEEN ADVISED OF THE POSSIBILITY OF SUCH DAMAGES, WHETHER IN CONTRACT, TORT, STRICT LIABILITY, OR OTHERWISE. THERE ARE NO THIRD PARTY BENEFICIARIES OF ANY AGREEMENTS OR ARRANGEMENTS BETWEEN S&P DOW JONES INDICES AND US, OTHER THAN THE LICENSORS OF S&P DOW JONES INDICES.
Historical Information
The graph below illustrates the performance of this Reference Index from January 1, 2011 to June 16, 2021, assuming an Initial Level of 4,223.70, which was its closing level on June 16, 2021. The red line represents a hypothetical Barrier Level of 3,167.78, which is equal to 75% of its closing level on June 16, 2021 (rounded to two decimal places). The actual Barrier Level will be based on the closing level of this Reference Index on the Trade Date.
S&P 500® Index (“SPX”) 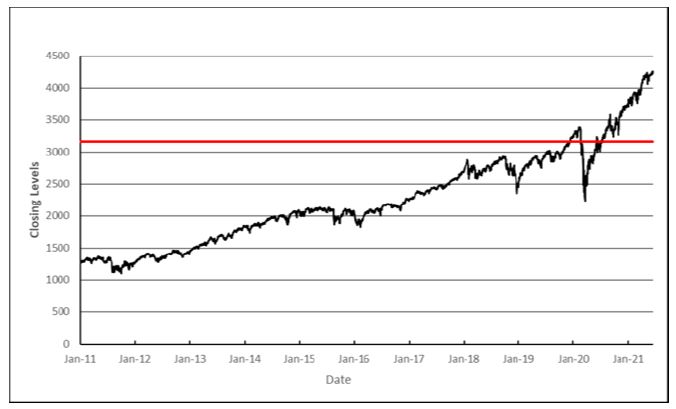 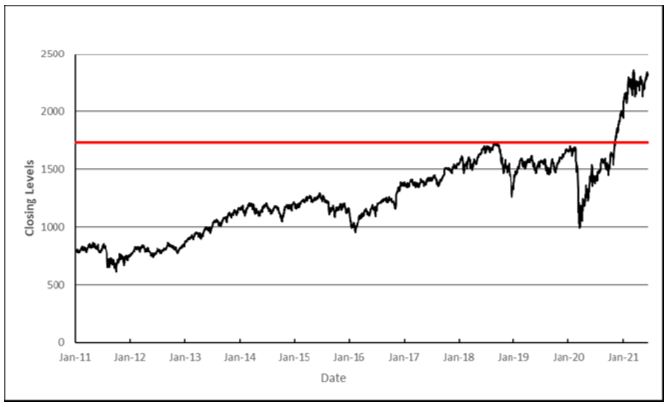 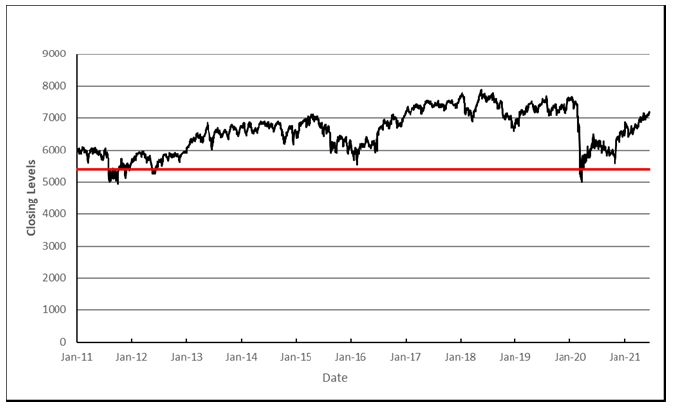 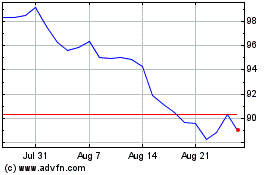 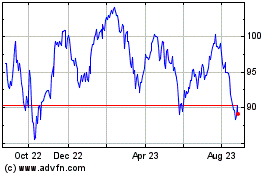 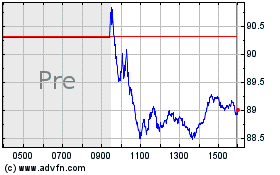