“For almost ten years, Hunter’s leadership has been integral to the transformation of HomeTrust to a thriving regional commercial community bank,” said Mr. Stonestreet. “When we converted to stock form in 2012, HomeTrust offered customers three lines of business in our western North Carolina locations. We were looking for the right individual to expand the Bank’s capabilities and offerings. Hunter quickly demonstrated his strategic and operational expertise and HomeTrust expanded into three more states – Tennessee, Virginia, and South Carolina – while expanding to ten lines of business to drive growth and stockholder value. Throughout our time working together, I have enjoyed seeing how his astute mind brings focus to our work, ultimately creating stockholder value while remaining true to HomeTrust’s 95-year commitment to our employees, customers and communities.”

“I look forward to continuing – and accelerating – the Bank’s positive growth trajectory,” said Mr. Westbrook. “It is incumbent upon us that we not only meet, but that we anticipate, the needs of our customers. I am confident that the drive, dedication and enthusiasm of the HomeTrust team will enable us to deliver more value to our customers and stockholders. The confidence Dana and the Board have demonstrated by this promotion is humbling and I enthusiastically embrace the opportunity to lead HomeTrust forward as a nimble, innovative, full-service commercial bank.”

Mr. Westbrook is a 30-year banking veteran who served as President and CEO of two community banks before joining HomeTrust. Mr. Westbrook also worked for nearly 20 years in various senior level positions with TCF Bank and its parent, TCF Financial Corporation. He earned his Master of Business Administration degree from the University of Minnesota’s Carlson School of Management and holds a Bachelor of Science in Accounting & Business from West Virginia University.

HomeTrust Bancshares, Inc. is the holding company for HomeTrust Bank. As of March 31, 2021, the Company had total consolidated assets of $3.6 billion. The Bank, founded in 1926, is a North Carolina state chartered, community-focused financial institution committed to providing value added relationship banking with over 40 locations as well as online/mobile channels. Locations include: North Carolina (including the Asheville metropolitan area, the "Piedmont" region, Charlotte, and Raleigh/Cary), Upstate South Carolina (Greenville), East Tennessee (including Kingsport/Johnson City/Bristol, Knoxville, and Morristown) and Southwest Virginia (including the Roanoke Valley). The Company is the 2nd largest publicly traded community bank holding company headquartered in North Carolina.

This press release includes "forward-looking statements" within the meaning of the Private Securities Litigation Reform Act of 1995. Such statements often include words such as "believe," "expect," "anticipate," "estimate," and "intend" or future or conditional verbs such as "will," "would," "should," "could," or "may." Forward-looking statements are not historical facts but instead represent management's current expectations and forecasts regarding future events, many of which are inherently uncertain and outside of the Company's control. Actual results may differ, possibly materially, from those currently expected or projected in these forward-looking statements. Factors that could cause the Company's actual results to differ materially from those described in the forward-looking statements include: the effect of the COVID-19 pandemic, including on the Company's credit quality and business operations, as well as its impact on general economic and financial market conditions and other uncertainties resulting from the COVID-19 pandemic, such as the extent and duration of the impact on public health, the U.S. and global economies, and consumer and corporate customers, including economic activity, employment levels and market liquidity; increased competitive pressures; the possibility that (i) the planned branch closures previously disclosed by the Company will not occur within the time frame anticipated or at all, (ii) the charges incurred by the Company in connection with the branch closures will be greater than expected and/or (iii) the cost savings realized by the Company from the branch closures will be lower than expected; the possibility that the additional servicing fee and gain on sale income resulting from the transitioning of the Bank’s back-office SBA loan servicing process in-house will be lower than expected; the possibility that the estimated savings from the early retirements of the Company’s long-term debt will be lower than expected; changes in the interest rate environment; changes in general economic conditions and conditions within the securities markets; legislative and regulatory changes; and other factors described in the Company's latest Annual Report on Form 10-K and Quarterly Reports on Form 10-Q and other documents filed with or furnished to the Securities and Exchange Commission (the “SEC”), which are available on the Company’s website at www.htb.com and on the SEC's website at www.sec.gov. These risks could cause the Company's actual results for fiscal 2021 and beyond to differ materially from those expressed in any forward-looking statements by, or on behalf of, the Company and could negatively affect its operating and stock performance. Any of the forward-looking statements that the Company makes in this press release or the documents it files with or furnishes to the SEC are based upon management's beliefs and assumptions at the time they are made and may turn out to be wrong because of inaccurate assumptions they might make, because of the factors described above or because of other factors that they cannot foresee. The Company does not undertake, and specifically disclaims, any obligation to revise any forward-looking statements to reflect the occurrence of anticipated or unanticipated events or circumstances after the date of such statements.

A photo accompanying this announcement is available at https://www.globenewswire.com/NewsRoom/AttachmentNg/e338eeb4-d2b6-47cf-bf08-0b4e6bf4f79c 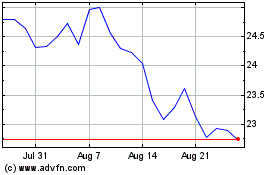 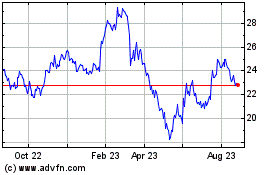 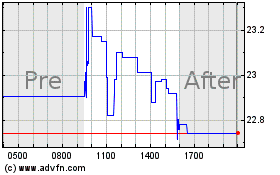