4.08
-0.110 (-2.63%)
Real-Time
Market Open
4.08
ApeCoin (APE) Sees Higher Prices Even In Bearish Market Conditions
September 20 2022 - 07:49PM
NEWSBTC
After the emergence of Decentralized Finance, Non-fungible tokens erupted in the crypto space. The novel sector carried its frenzy wave for a long time before normalizing and continuing a gradual expansion. One of the notable coins from the NFT sector is ApeCoin.  ApeCoin is built on Ethereum and connected to the Bored Ape Yacht Club NFT launched in 2021. At launch, only one billion ApeCoin tokens were created and fixed without plans of releasing more. Related Reading: Cosmos Struggles With $17 As Price Heads Into Distribution Phase During the launch, the team sold some tokens and reserved some for later dispersal. The Reason Behind Higher Gains Of APE Coin Earlier this year, analysts predicted that ApeCoin APE could reach $5 by November 2022. But the coin has surpassed the predictions and is currently trading at $5.65 on September 20. Though the ApeCoin APE, at the time of writing, has lost over 7% in the last 24 hours, it added over 10% in the last week. The achievements place it above many coins presently trading in the red. Many investors now wonder what the force behind ApeCoin’s growth could be. A little research showed that the recent event on its network could have helped to boost the price gain.  On September 17, ApeCoin treasury gifted 25 million APE tokens to launch contributors. These tokens were part of the ones reserved after launch.  The event news pushed APE up almost immediately before it settled down again. Fast-forward to September 20, the market sentiment for APE is still positive, gradually moving its price above others in the same league. Why Is The Crypto Market Bearish? The early hours of September 19 saw the whole crypto market in the red. Many coins lost their previous price gains and crashed. This trend started on September 15, immediately after the Ethereum Merge.  The event expected to reverse the market to a bullish trend now caused the opposite. Bitcoin historical data shows that it lost $1000 immediately after the merge. On the other, Ethereum lost its grip on $1600+, plunging to $1,471.69 the same merge day.  Three days later, Ether’s price fell to $1,335.33, causing many to say that the upgrade was overhyped. As Bitcoin and Ethereum lost price gains, other cryptocurrencies followed suit, leaving the market in red on September 19.  But what could be the reason for the price loss? This week opened with a lot of dread as the market awaited the new interest rate hike. Recall that the inflation data released for August was higher than expected.  As a result, the Federal Reserve is to release a new interest rate, a third-straight 75-basis-point.  Will The Interest Rate Hike Plunge The Market?  The meeting for the rate decision kicked off on September 20 and will end on September 21 with the announcement. Currently, the whole financial market awaits the information in fear.  Some even hinted that the Feds might target a 100-point, a level not reached in the last 40 years. Analysts on Wall Street and JPMorgan Chase keep debating whether the 100-point basis would be the next level.  Related Reading: ETH Backpedals After Hitting $1,800 Ahead Of Merge Last Week But on the side of investors, a 75-basis point will be suitable for them instead of the feared level. As the meeting is moving towards the end, asset prices have become highly volatile, showing the uncertainty gripping investors.  By tomorrow, September 21, the Fed’s decision will determine the trend erupting in the crypto market.  Featured image from Pixabay and chart from TradingView.com
ApeCoin (COIN:APEUSD)
Historical Stock Chart
From Nov 2022 to Dec 2022 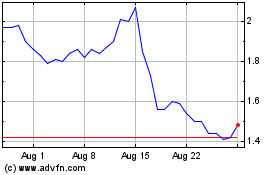 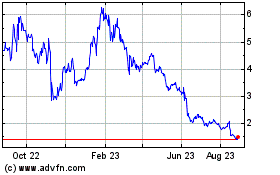 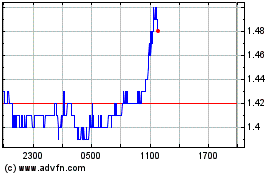