On September 22, 2020, Kirkland’s, Inc. (the “Company”) and Jeffrey T. Martin, the Company’s Senior Vice President, Omni-Channel Retail, entered into an employment agreement (the “Employment Agreement”), with an effective term that commenced on September 22, 2020 and that will continue for an indefinite term (the “Term”), until terminated as provided in the Employment Agreement.  The Employment Agreement provides Mr. Martin with the following compensation and benefits: (a) annual base salary of no less than $350,000, subject to periodic review and adjustment in the discretion of the Compensation Committee of the Board (the “Compensation Committee”); (b) participation in any annual bonus plans maintained by the Company for its senior executives, with a target amount for such bonus to be 50% of Mr. Martin’s base salary and the actual bonus payable with respect to a particular year to be determined by the Compensation Committee, based on the achievement of corporate and individual performance objectives established by the Compensation Committee; (c) participation in any equity-based compensation plans maintained by the Company, at the discretion of the Committee; and (d) participation in all employee benefit plans or programs for which any member of the Company’s senior management is eligible under any existing or future Company plan or program.

If the Company terminates Mr. Martin’s employment without Cause (as defined below) or if Mr. Martin resigns for Good Reason, the Company shall pay Mr. Martin one (1) times his base salary for the year in which such termination shall occur in 26 substantially equal bi-weekly installments.  The term “Cause” is defined in the Employment Agreement to mean the occurrence of any of the following, as determined in good faith by the Board: (i) alcohol abuse or use of controlled drugs (other than in accordance with a physician’s prescription) by Mr. Martin; (ii) illegal conduct or gross misconduct of Mr. Martin which is materially and demonstrably injurious to the Company or its Affiliates including, without limitation, fraud, embezzlement, theft or proven dishonesty; (iii) Mr. Martin’s conviction of a misdemeanor involving moral turpitude or a felony; (iv) Mr. Martin’s entry of a guilty or nolo contendere plea to a misdemeanor involving moral turpitude or a felony; (v) Mr. Martin’s material breach of any agreement with, or duty owed to, the Company or its affiliates; or (vi) Mr. Martin’s failure, refusal or inability to perform, in any material respect, his duties to the Company, which failure continues for more than 15 days after written notice thereof from the Company.

The Employment Agreement also contains a non-competition agreement from Mr. Martin by which he agrees not to, directly or indirectly, among other things, be employed by or otherwise participate in the management of certain competitive companies or their affiliates, each of which are identified in the Employment Agreement, for a period of 12 months from the date of his termination.  The Company also has the option to extend the term of Mr. Martin’s non-competition agreement for up to an additional 12 months by agreeing to pay him base salary in substantially equal bi-weekly installments for the number of weeks that the Company elects to extend the non-competition agreement as severance.  The Employment Agreement also contains other standard restrictive covenants such as confidentiality, works for hire and non-solicitation of customers and employees that will extend for a period of 24 months following termination of employment.

There is no arrangement or understanding between Mr. Martin and any other person pursuant to which Mr. Martin was selected as an officer.  Mr. Martin is not a party to any transaction with any related person required to be disclosed pursuant to Item 404(a) of Regulation S-K.

The following exhibit is furnished as part of this Report: 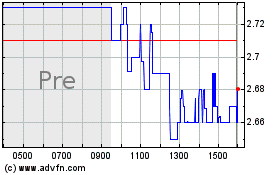