MELBOURNE, Australia--National Australia Bank Ltd. (NAB.AU) recorded a modest pick up in profit for the third quarter of its financial year, aided by a fall in short-term wholesale funding costs and flat expenses compared with earlier in the year.

Cash earnings, a measure adjusted for fair value and hedging movements and is the basis for calculating dividend payouts, was A$1.65 billion, which NAB said was up about 1% on the quarterly average of the first half of the year and against the same quarter a year earlier. 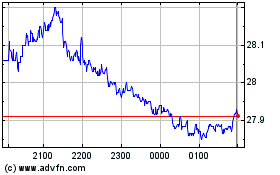