This Amendment No. 1 to Current Report on Form 8-K (this “Form 8-K/A”) amends the Current Report on Form 8-K of SunCoke Energy, Inc. (the “Company”), filed with the Securities and Exchange Commission on December 8, 2020 (the “Original Form 8-K”), which reported the appointment of Ralph M. Della Ratta, Jr. and Michael Ward Lewis to serve as directors of the Company. At the time of filing the Original Form 8-K, the Board had not made any determinations regarding committee assignments for Messrs. Della Ratta and Lewis. Pursuant to Instruction 2 to Item 5.02 of Form 8-K, this Form 8-K/A is being filed to provide the information on committee assignments called for in Item 5.02(d)(3) of Form 8-K that had not been determined at the time of filing of the Original Form 8-K. This filing also provides additional details regarding the background and qualifications of Messrs. Della Ratta and Lewis.

Mr. Della Ratta, 67, brings valuable business and financial experience to the Board, particularly with regard to capital raising, commercial banking, mergers and acquisitions, strategic financial analysis and capital markets transactions. From 2004 to 2017, he was Founder, Senior Managing Director and Chief Executive Officer of Western Reserve Partners LLC, a Cleveland, Ohio based investment banking merger and acquisition advisory firm. The firm was acquired in 2017 by Citizens Financial Group [NYSE: CFG], a large commercial banking institution. Since the acquisition, Mr. Della Ratta has served as Co-Head of Merger and Acquisition Advisory Services for Citizens Financial Group, Inc., leading a team focused on delivering M&A services and related financial analysis to middle-market customers. Mr. Della Ratta also has knowledge of manufacturing and distribution in the steel and metals services industry. From 2004 to 2020, he served on the Board of Olympic Steel, Inc. [NASDAQ: ZEUS] (a leading U.S. metals service center), where he was Lead Independent Director, a member of the Audit and Compliance Committee and, at different times, served as Chair of the Compensation Committee and Chair of the Nominating Committee. Mr. Della Ratta is involved in numerous non-profit and civic organizations, including: The Duke University Alumni Association and Annual Fund, Kent State University Board of Trustees (past Chair), The Ohio Venture Capital Authority, The Rock and Roll Hall of Fame, and United Cerebral Palsy Telethon (Chair).

Mr. Lewis, 71, is an experienced banking executive who has spent over 40 years in the financial services industry with business line responsibility. He provides senior management-level strategic planning, business development and managerial expertise to the Board. During the course of his career, Mr. Lewis has risen through progressively responsible senior leadership positions at BMO Harris Bank, N.A. (a large U.S. banking institution and subsidiary of Bank of Montreal, the Canadian multinational investment bank and financial services company) and, from 1998 until his retirement in 2013, Mr. Lewis was Executive Vice President, and Chicago metro regional president. His responsibilities have included strategic integration and management of business segments across the regional network of BMO Harris branches, as well as growing the bank’s commercial and retail business, community development and consumer loans and services. Mr. Lewis is an active member of Chicago’s business and civic communities and has served on several boards, including the Chicago Regional Transportation Authority, the Urban Partnership Bank (a full-service community development bank), and Chicago United (a corporate membership and advocacy organization promoting economic opportunities by advancing multiracial leadership in corporate governance, executive level management, and business diversity).

Pursuant to the requirements of the Exchange Act, the registrant has duly caused this report to be signed on its behalf by the undersigned hereunto duly authorized. 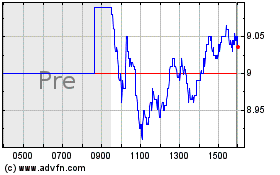