French drugs company Sanofi-Aventis (SNY) plans to maintain its pace of acquisitions and focus on small- and mid-sized targets, the company said Wednesday as it beat expectations with a 10% rise in fourth-quarter net profit, spurred by sales of its key drugs, including Lantus and Lovenox, as well as an extra boost from vaccines.

"We're not particularly limited in size...the bigger the deal becomes, the more a company gets bogged down in integrating it, so I continue to believe smaller- to mid-size is certainly the way to go" Chief Executive Chris Viehbacher said of the company's acquisition plans for this year at a presentation on fourth-quarter results.

Net profit for the last quarter of 2009 rose to EUR1.8 billion from EUR1.63 billion a year earlier, beating analyst expectations for EUR1.76 billion.

Sanofi's quarterly sales rose 3.8% to EUR7.36 billion from EUR7.09 billion, lifted by fast growth in the vaccines division, one of the company's platforms for future growth, as governments stockpiled vaccines for the AH1N1 swine flu virus.

Sanofi said it expects to record growth of 'business' earnings per share at constant rates of 2% to 5% this year, excluding the effect of potential generic competition to its blood thinner Lovenox.

CEO Viehbacher said it was too early to calculate the impact of generic competition to Lovenox in the U.S. as it is not yet known whether one or more generic alternatives will be approved there.

Drugs companies are scrambling to find sources of growth to fill in for the high-margin, blockbuster drugs business that is slipping away as patents expire.

Analysts welcomed a pledge by Viehbacher last year to match 2008 sales by 2013 despite a drop off in revenues from expiring patents on key drugs. Among Sanofi's top-selling drugs, sales of its cancer treatment Eloxatin and heart treatment Plavix weakened over the quarter due to competition from generic alternatives.

Over the past year, Viehbacher has embarked on an acquisition spree, bolstering the company's over-the-counter business, vaccines and generics, with a focus on emerging markets in a bid to steer the company towards new sources of growth. Viehbacher stressed the company is interested in further acquisitions in the field of consumer health. Sanofi recently acquired U.S.-based Chattem, which makes over-the-counter lotions and potions. Sanofi made EUR6.6 billion-worth of acquisitions last year.

"What changed in 2009 was the focus away from the patent cliff towards new strategies of growth," Viehbacher said Wednesday.

Sanofi also said it is 'highly probable' that it will merge its animal health unit Merial with Merck & Co.'s (MRK) Intervet/Schering-Plough business. Sanofi took over Merial, a joint-venture run with Merck, as Merck sought clearance from U.S. antitrust authorities for its takeover of Shering-Plough last year. The $4 billion sale of Merck's half of the business included an option for Sanofi to combine Merial with Shering Plough's Intervet unit, and a decision is expected in the coming weeks.

Viehbacher Wednesday also said he doesn't expect results from further studies on its diabetes drug Lantus before next year. Sanofi managed to shake off investor concern after a study suggested a possible link between the drug and higher rates of cancer last year. Analysts in recent months have flagged the possibility the issue could return to focus as results of further studies are made public.

Viehbacher indicated that the company expects its cancer treatment BSI-201, which gained fast-track status for approval with U.S. authorities, to be filed with authorities there at the end of this year or early next year.

GlaxoSmithKline (NYSE:GSK)
Historical Stock Chart
From Apr 2022 to May 2022 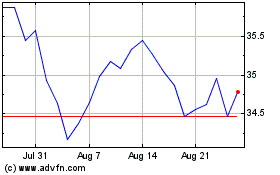 GlaxoSmithKline (NYSE:GSK)
Historical Stock Chart
From May 2021 to May 2022 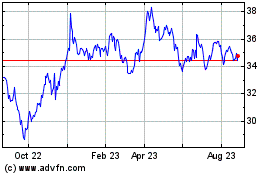 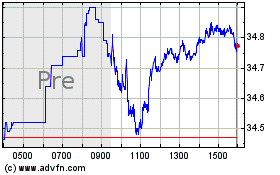