Cassava Sciences, Inc. (Nasdaq: SAVA) today announced final results of a Phase 2b study with its lead drug candidate, sumifilam, in Alzheimer’s disease. In a clinical study funded by the National Institutes of Health (NIH), sumifilam significantly improved an entire panel of validated biomarkers of disease in patients with Alzheimer’s disease. The ability to improve multiple biomarkers from distinct biological pathways with one drug has never been shown before in patients with Alzheimer’s disease. Study results are expected to be published in a peer-reviewed publication. Sumifilam is the first of a new class of drug compounds that bind to a protein called Filamin A.

“Filamin-binding molecules are new to Alzheimer’s research and may represent an important advance if these data can be replicated in larger studies,” said Jeffrey Cummings, M.D., Sc.D., Founding Director of the Cleveland Clinic Lou Ruvo Center for Brain Health, and Chambers Professor of Brain Science at the University of Nevada, Las Vegas. “I am pleased to see early evidence of disease-modifying effects in patients with this investigational drug. The data appear to represent a step forward toward urgently needed treatments for Alzheimer’s disease.”

In addition, Alzheimer’s patients treated with sumifilam showed directional improvements in tests of remembering new information, versus patients on placebo. Improvements in cognition correlated most strongly with decreases in P-tau181, a biomarker that, when elevated, leads to tangles in the brain. Sumifilam decreased brain levels of Ptau-181 by 8-11%, versus placebo.

“The clinical data suggest sumifilam may be slowing disease progression in Alzheimer’s patients,” said Nadav Friedmann, PhD/MD, Chief Medical Officer, Cassava Sciences. “This exciting possibility will need to be evaluated in future collaborations with patients, physicians, advisors and others.”

“Other than a few drugs to help ease the decline, there’s really nothing out there to treat people with Alzheimer’s,” said Remi Barbier, Chairman, President & CEO, Cassava Sciences. “The improvement on multiple biomarkers in this clinical study is a first and offers hope that sumifilam has potential to become a transformative treatment for people with Alzheimer’s disease.”

Phase 2b Study ResultsIn this study, drug was safe and well-tolerated, with no drug-related patient discontinuations. The study used biomarkers to measure drug effects. Biomarkers are objective biological endpoints used to track the progression of Alzheimer’s disease. Molecular aberrations in the brain are reflected in biomarkers found in cerebrospinal fluid (CSF), a fluid that surrounds the brain. A key objective of this study was to measure changes in levels of CSF biomarkers in study participants before and after 28 days of treatment (i.e., percent change from baseline).

Key biomarker results include the following (all p-values versus placebo):

A further objective of this study was to measure drug effects on cognition. Patients were tested at baseline and again on Day 28. Changes in episodic memory and spatial working memory were assessed on CANTAB, a validated, computer-based battery of tests. CANTAB is designed to measure cognitive skills regardless of the subject’s language skills, speed, gender or education. Only directional trends are observed, due to limitations around study size (N=64).

Study Methods for Cerebrospinal Fluid (CSF) BioanalysisCSF was drawn from all study participants by lumbar puncture, an outpatient procedure used to remove a small sample of CSF from the lower spine. Study participants underwent two CSF draws: before treatment started and again after 28 continuous days of treatment. All CSF samples were sent to outside labs for bioanalysis. Bioanalysis refers to a set of laboratory tests that detect and measure very small amounts (pg/mL) of biomarkers in CSF. Bioanalyses were conducted under blinded conditions to eliminate any possibility of bias. An academic lab generated final results. The validity of final results is evidenced by robust correlations (R2=0.96, on average) between biomarker movements over 28 days in the dataset for placebo samples, and only small changes in biomarkers in the placebo group, as expected.

As previously disclosed, an initial bioanalysis by a different lab showed highly anomalous data, e.g., huge swings (in both directions) in levels of biomarkers, as well as biomarkers moving in opposite directions in the same patients, all in the group who took placebo for 28 days. With its validity in question, the initial bioanalysis serves no useful purpose.

Phase 2b Study ConclusionsA small, well-controlled study of sumifilam showed promising treatment effects in patients with mild-to-moderate Alzheimer’s disease. In this study, sumifilam treatment over 28 days improved an entire panel of validated biomarkers of Alzheimer’s disease, decreased measurements of neuroinflammation, showed a 98% responder rate, appears safe and well-tolerated, and appears to benefit cognition. Importantly, the data are consistent with prior clinical and preclinical results, the drug’s mechanism of action and over 10 years of basic research.

Ongoing Open Label StudyCassava Sciences is conducting an ongoing, long-term, open-label, multi-center, extension study of sumifilam 100 mg twice-daily for 12 months. The study’s target enrollment is approximately 100 patients with mild-to-moderate Alzheimer’s disease, including patients from prior studies of sumifilam. The open-label study is currently over 50% enrolled.

About SumifilamSumifilam is a proprietary, small molecule (oral) drug that restores the normal shape and function of altered filamin A (FLNA), a scaffolding protein, in the brain. Altered FLNA in the brain disrupts the normal function of neurons, leading to Alzheimer’s pathology, neurodegeneration and neuroinflammation. The underlying science for sumifilam is published in peer-reviewed journals, including Journal of Neuroscience, Neurobiology of Aging, Journal of Biological Chemistry, Neuroimmunology and Neuroinflammation and Journal of Prevention of Alzheimer’s Disease. The Company is also developing an investigational diagnostic, called SavaDx, to detect Alzheimer’s disease with a simple blood test.

Sumifilam and SavaDx were both developed in-house. Both product candidates are substantially funded by peer-review research grant awards from the National Institutes of Health. Cassava Sciences owns worldwide development and commercial rights to its research programs in Alzheimer’s disease, and related technologies, without royalty obligations to any third party. Patent protection in this area currently runs beyond 2037, plus extensions, and includes seven issued patents and related patent filings and applications.

About Cassava Sciences, Inc.Cassava Sciences’ mission is to discover and develop innovations for chronic, neurodegenerative conditions. Over the past 10 years, Cassava Sciences has combined state-of-the-art technology with new insights in neurobiology to develop novel solutions for Alzheimer’s disease. For more information, please visit: https://www.CassavaSciences.com

Cassava Sciences’ Phase 2b study of sumifilam in Alzheimer’s disease was funded by clinical research grant #AG060878 from the National Institutes of Health (NIH/NIA).

The content of this press release is solely the responsibility of Cassava Sciences and does not necessarily represent the official views of the NIH/NIA.

Cautionary Note Regarding Forward-Looking Statements: This press release contains “forward-looking statements” for purposes of the Private Securities Litigation Reform Act of 1995 (the Act). Cassava Sciences claims the protection of the Safe Harbor for forward-looking statements contained in the Act. All statements other than statements of historical fact contained in this press release including, but not limited to, statements regarding the status of current and future clinical studies with sumifilam; the interpretation of results of our Phase 2 clinical studies including cognition data and plans to publish results in a peer-reviewed journal; potential health benefits, if any, of changes in levels of biomarkers; verbal commentaries made by Cassava Sciences’ employees and scientific advisors; and potential benefits, if any, of the Company’s product candidates for Alzheimer’s disease are forward-looking statements. Such statements are based largely on the Company’s current expectations and projections about future events. Such statements speak only as of the date of this press release and are subject to a number of risks, uncertainties and assumptions, including, but not limited to, those risks relating to the ability to conduct or complete clinical studies on expected timelines, to demonstrate the specificity, safety, efficacy or potential health benefits of our product candidates, the severity and duration of health care precautions given the COVID-19 pandemic, any unanticipated impacts of the pandemic on our business operations, and including those described in the section entitled “Risk Factors” in Cassava Sciences’ Annual Report on Form 10-K for the year ended December 31, 2019 and future reports to be filed with the SEC. In light of these risks, uncertainties and assumptions, the forward-looking statements and events discussed in this press release are inherently uncertain and may not occur, and actual results could differ materially and adversely from those anticipated or implied in the forward-looking statements. Accordingly, you should not rely upon forward-looking statements as predictions of future events. Except as required by law, the Company disclaims any intention or responsibility for updating or revising any forward-looking statements contained in this press release. For further information regarding these and other risks related to our business, investors should consult our filings with the SEC, which are available on the SEC's website at www.sec.gov. 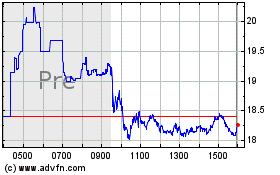