THE SECURITIES EXCHANGE ACT OF 1934

(Translation of Registrant's Name Into English)

Indicate by check mark whether the registrant files or will file annual reports under cover of Form 20-F or Form 40-F. Form 20-F X Form 40-F ___

Indicate by check mark if the registrant is submitting the Form 6-K in paper as permitted by Regulation S-T Rule 101(b)(1): ___

Indicate by check mark if the registrant is submitting the Form 6-K in paper as permitted by Regulation S-T Rule 101(b)(7): ___

As disclosed in a report on Form 6-K filed by Highway Holdings Limited (the “Company”) with the U.S. Securities and Exchange Commission (“SEC”) on January 21, 2020 (the “January Form 6-K”), the Company reported that on January 21, 2020 the Company appointed Gumbiner Savett Inc. (“Gumbiner”) as the Company’s independent registered public accounting firm for the fiscal year ended March 31, 2020. Gumbiner is an assurance, tax, and business advisory firm based in Santa Monica, California, U.S. As noted in the January Form 6-K, Gumbiner replaced Deloitte Touche Tohmatsu Certified Public Accountants LLP (“Deloitte”), the former independent auditor in Hong Kong.

As previously reported in the January Form 6-K, Deloitte’s audit reports on the Company’s consolidated financial statements for each of the fiscal years ended March 31, 2019 and March 31, 2018 did not contain an adverse opinion or disclaimer of opinion, and was not qualified or modified as to uncertainty, audit scope or accounting principles. During the Company’s fiscal years ended March 31, 2019 and March 31, 2018 and through the subsequent interim period on or prior to January 21, 2020, there were no disagreements between the Company and Deloitte on any matter of accounting principles or practices, financial statement disclosure, or auditing scope or procedure, which disagreements, if not resolved to the satisfaction of Deloitte, would have caused Deloitte to make reference to the subject matter of the disagreements in connection with its report.

Gumbiner performed substantive work with respect to the audit work for the fiscal year ended March 31, 2020 but did not complete its work or issue an audit report. During the course of its work, Gumbiner informed the Company that it believed that there were material weaknesses in the Company’s internal control over financial reporting as of March 31, 2020. There were no disagreements with Gumbiner on any matter of accounting principles or practices, financial statement disclosure, or auditing scope or procedure, which disagreement(s) or reportable event(s), if not resolved to the satisfaction of Gumbiner would have caused Gumbiner to make reference to the subject matter of the disagreement(s) or reportable event(s) in connection with its report on the Company’s consolidated financial statements for the March 31, 2020 fiscal year.

During the Company’s fiscal years ended March 31, 2018, 2019 and 2020, and through the subsequent interim period on or prior to July 24, 2020, neither the Company nor anyone on its behalf has consulted with Centurion ZD CPA & Co. on either (a) the application of accounting principles to a specified transaction, either completed or proposed, or the type of audit opinion that might be rendered on the Company’s financial statements, or (b) any matter that was the subject of a disagreement, as that term is defined in Item 16F(a)(1)(iv) of Form 20-F (and the related instructions thereto) or a reportable event as set forth in Item 16F(a)(1)(v)(A) through (D) of Form 20-F.

In accordance with Item 304(a)(3) of Regulation S-K, the Company provided Gumbiner with a copy of the statements set forth in this filing on Form 6-K with the SEC. The Company requested that Gumbiner furnish the Company with a letter addressed to the SEC stating whether such accounting firm agrees with the statements in this Form 6-K as required by SEC rules, and Gumbiner has furnished the requested letter, which is attached as Exhibit 99.1 to this report.

Pursuant to the requirements of the Securities Exchange Act of 1934, the registrant has duly caused this report to be signed on its behalf by the undersigned thereunto duly authorized. 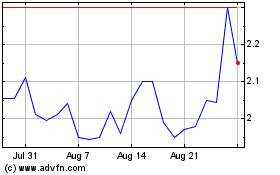 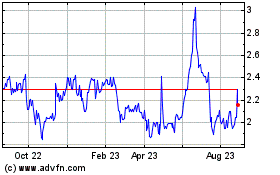 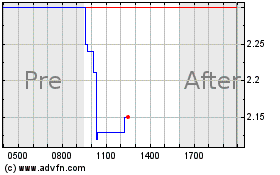