Effective January 1, 2020, Christopher Becker has succeeded Michael N. Vittorio as President and Chief Executive Officer of The First of Long Island Corporation (the “Company”), and its wholly owned subsidiary, The First National Bank of Long Island (the “Bank”), and he has been appointed to the Board of Directors of the Company and the Bank.  Mr. Vittorio will remain a director past his December 31, 2019 retirement date and until the 2020 annual meeting of stockholders.
The Company also has announced that effective January 1, 2020, Mark D. Curtis and Paul J. Daley have retired from employment with the Company and the Bank.  Mr. Curtis has served as Senior Executive Vice President and Chief Financial Officer of the Company and the Bank, and Treasurer of the Company and Cashier of the Bank; and Mr. Daley has served as Executive Vice President of the Company and the Bank and Senior Commercial Banking Officer of the Bank.  The parties have agreed that under the terms of their employment agreements with the Company and the Bank (the “Employment Agreements”), the retirements will be considered a termination of employment without cause.  The Company and the Bank have entered into retirement agreements with Messrs. Curtis and Daley as of January 1, 2020 (the “Retirement Agreements”), under which the Bank shall: (1) pay $865,262 to Mr. Curtis and $930,816 to Mr. Daley in a cash lump sum to settle any outstanding contractual obligations that the Company or Bank may have under the Employment Agreements; and (2) transfer ownership to Messrs. Curtis and Daley of their company-issued automobiles.  Additionally, the Company shall expense approximately $839,600 related to restricted stock units earned by Messrs. Vittorio and Curtis.  The expenses related to severance and the restricted stock units are expected to be reflected in the financial statements for the quarter and year ended December 31, 2019.  The Retirement Agreement with Mr. Curtis includes certain consulting services to be provided by Mr. Curtis for the twelve month period following his retirement, for which he will be compensated $135,000.  The foregoing summary of the Retirement Agreements is qualified in its entirety by the full text of the Retirement Agreements, copies of which are attached to this Form 8-K as Exhibits 10.1 and 10.2 and incorporated herein by reference.
Effective January 1, 2020, Jay P. McConie has been appointed Executive Vice President and Chief Financial Officer of the Company and the Bank, Treasurer of the Company and Cashier of the Bank.   Mr. McConie (age 51) has been employed as Senior Vice President and Chief Investment Officer of the Bank since 2015.  Prior to that time, Mr. McConie served as Executive Vice President and Chief Financial Officer of Community National Bank from 2007 to 2015.  Mr. McConie began his career at KPMG LLP in their Financial Services Group.  He is a graduate of Long Island University with a B.S. in Accounting and a Certified Public Accountant.
The Company and Bank have entered into an employment agreement (the “Agreement”) with Mr. McConie, effective as of January 1, 2020, which Agreement replaces a severance agreement previously entered into with Mr. McConie. The Agreement provides for a base salary of $300,000 and has a term of two years.  Commencing on the first anniversary date of the agreement and continuing on each anniversary date thereafter, the agreement renews for an additional period of one year such that the remaining term shall be two years unless written notice of non-renewal is provided to Mr. McConie at least thirty days prior to any such anniversary date.  Notwithstanding the foregoing, the Agreement shall expire on December 31 of the calendar year in which the executive attains age 65. Pursuant to the Agreement, if Mr. McConie is terminated by the Board without cause or he terminates his employment following an event constituting Good Reason, he will receive a cash lump sum severance payment equal to two times his base salary plus an amount equal to the product of the reasonably estimated monthly cost of the medical, dental and vision insurance coverage maintained by the Bank for him immediately prior to the date of termination multiplied by twenty-four.  The cash lump sum payment is conditioned on the execution a release of any claims against the Company.  Severance payments following a change in control will be reduced to avoid an excess parachute payment under Section 280G of the Internal Revenue Code if doing so results in a greater after-tax benefit to him.  Mr. McConie is subject to non-compete and non-solicitation provisions for a one year period following termination of employment. However, such restrictions do not apply in the event of termination of employment for cause or a termination of employment following a change in control.
The foregoing summary of the Agreement is qualified in its entirety by the full text of the Agreement, a copy of which is attached to this Form 8-K as Exhibit 10.3 and incorporated herein by reference.
Copies of press releases issued by the Company relating to the succession of Christopher Becker as President and Chief Executive Officer and the appointment of Jay P. McConie as Executive Vice President and Chief Financial Officer are attached as Exhibits 99.1 and 99.2 to this Form 8-K.
SIGNATURE
Pursuant to the requirements of the Securities Exchange Act of 1934, the registrant has duly caused this report to be signed on its behalf by the undersigned hereunto duly authorized.
First of Long Island (NASDAQ:FLIC)
Historical Stock Chart
From Aug 2020 to Sep 2020 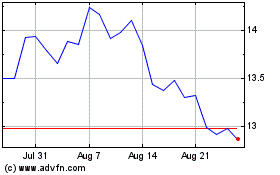 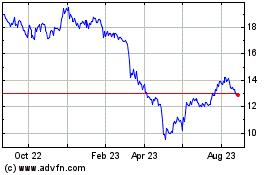 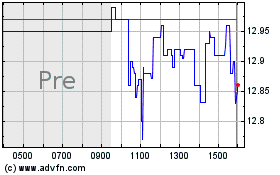