Digital Ally, Inc. (NASDAQ: DGLY) (the “Company”), which develops, manufactures and markets advanced video recording products for law enforcement, emergency management, fleet safety and security, today announced the receipt of the initial purchase order under a substantial contract awarded by the Director of Strategic Procurement of that country for the expected deployment of body cameras to its entire national police force. The contract will include up to 5,000 body cameras with Digital Ally’s web-based software infrastructure service for a three-year period. The contract is expected to result in revenues exceeding $4.0 million commencing with delivery of the initial purchase order in February 2020 and the release of periodic purchase orders thereafter. Upon completion, this contract would be the largest body camera deployment in the Company’s history and the largest contract for recurring service revenues for its web-based software related to the body cameras.

The contract was awarded to Digital Ally after an extensive evaluation process resulting in the national police force replacing a competitors’ hardware and services with Digital’s body camera and new web-based software services offerings.

“The award of this international contract is an important milestone for Digital Ally because the size and complexity of the deployment proves the scalability of the Company’s body camera hardware and its web-based software services,” stated Stanton E. Ross, Chief Executive Officer of the Company. “The Company has been working with one of its distributors on this contract for approximately twelve months, which illustrates the long sales cycle that is typical of large international market opportunities. We have sufficient inventory on hand and expect to fulfill the initial part of the order in the current quarter and continue deliveries as required,” continued Ross. “The contract requires Digital Ally to provide its new web-based software that will generate significant recurring service revenues from the technology infrastructure necessary to retrieve and manage the audio and video evidence generated by the body cameras,” concluded Ross.

The Company notes that this international order was not originally factored into the initial Revenue Guidance for the fiscal year 2020. It had previously provided guidance that its expected revenues for this year would exceed $13.5 million. The increase in expected revenues will not necessarily be proportionate during the fulfillment of the contract. The Company also anticipates the continuation of its increased recurring service revenues during the term of the contract.

This press release contains forward-looking statements within the meaning of Section 27A of the Securities Act of 1933 and Section 21E of the Securities Act of 1934. These forward-looking statements are based largely on the expectations or forecasts of future events, can be affected by inaccurate assumptions, and are subject to various business risks and known and unknown uncertainties, a number of which are beyond the control of management. Therefore, actual results could differ materially from the forward-looking statements contained in this press release. A wide variety of factors that may cause actual results to differ from the forward-looking statements include, but are not limited to, the following: whether the Company will be able to deploy the body cameras and implement the web-based software efficiently and effectively under the contract; whether the national police force will continue releasing periodic purchase orders under the contract; whether the Company will be able to expand the market share for its products from additional domestic and international law enforcement and government agencies and continue the growth of its recurring service revenues; whether the Company’s guidance regarding its 2020 revenues will be accurate; whether the Company will be able to adapt its technology to new and different uses, including being able to introduce new products; competition from larger, more established companies with far greater economic and human resources; its ability to attract and retain customers and quality employees; the effect of changing economic conditions; and changes in government regulations, tax rates and similar matters. These cautionary statements should not be construed as exhaustive or as any admission as to the adequacy of the Company's disclosures. The Company cannot predict or determine after the fact what factors would cause actual results to differ materially from those indicated by the forward-looking statements or other statements. The reader should consider statements that include the words "believes", "expects", "anticipates", "intends", "estimates", "plans", "projects", "should", or other expressions that are predictions of or indicate future events or trends, to be uncertain and forward-looking. The Company does not undertake to publicly update or revise forward-looking statements, whether as a result of new information, future events or otherwise. Additional information respecting factors that could materially affect the Company and its operations are contained in its annual report on Form 10-K for the year ended December 31, 2018 and quarterly report on Form 10-Q for the three and nine months ended September 30, 2019, as filed with the Securities and Exchange Commission. 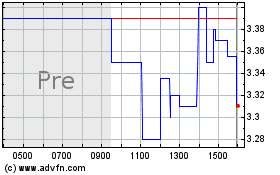