Nancy McKinstry, CEO and Chairman of the Executive Board, commented: "We have had a good start to the year, broadly in line with our expectations. The group remains focused on delivering expert solutions that support our customers' workflow and on expanding the reach of our key global products. We are making progress on fostering the development of recently acquired businesses and have successfully completed several non-core disposals in the first quarter. Across the group, efficiency savings are helping to fund investment and support margins. I am pleased to confirm we are on track to meet our full-year guidance."

First quarter revenues declined 8% in reporting currency, reflecting a 10% impact from currency due to the depreciation of the U.S. dollar against the Euro (average €/$ 1.23 in 1Q 2018 vs. €/$ 1.07 in 1Q 2017). Excluding the effect of currency, revenues increased 2%, with organic growth of 4% partly offset by the effect of net disposal activity. Subscription and other recurring revenues grew 5% organically. The first-quarter adjusted operating profit margin increased slightly compared to a year ago. Increased investment in product development, the inclusion of Tagetik (acquired April 2017), and the effect of exchange rate movements were offset by the benefits of efficiency programs.

Under IFRS 15, certain revenues and costs are recognized more evenly throughout the year and over the life of the related contracts. The accounting standard has minimal impact on group revenues and profits and has no impact on adjusted free cash flow. Had we continued to apply the IAS 18 standard, organic growth would have been 4% and the adjusted operating profit margin would have declined slightly in the first quarter.

Health achieved mid-single-digit organic growth, as expected, and improved its adjusted operating profit margin. Clinical Solutions delivered double-digit organic growth and commenced the launch of UpToDate Advanced, a next-generation decision tool that provides guided, patient-specific pathways. Health Learning, Research & Practice revenues declined on an organic basis, primarily due to a fall in print book revenues following higher-than-expected returns. In the first quarter, we reduced our interest in Medicom China from 55% to 45%. As a result, Medicom (2017 revenues €8 million) will now be deconsolidated and treated as an equity-accounted investee starting in April 2018. For the full year, we continue to expect Health to deliver good organic growth, similar to prior year levels, and a stable adjusted operating profit margin. We now expect the first half adjusted operating profit margin to improve (previously expected decline) due to the timing of investments and savings.

Governance, Risk & Compliance revenues decreased by 18% overall due to recent disposal activity and the impact of currency. Organic growth was 3% in the quarter. Recurring revenues saw modest organic growth. Legal Services transactional revenues were strong in the quarter, while Financial Services transactional revenues declined as expected. Other non-recurring revenues, which include software license and implementation fees, posted high single-digit organic growth, benefitting from 2017 sales performance. For the full year, we continue to expect good organic growth and a higher adjusted operating profit margin driven by operating efficiencies and portfolio reshaping.

Legal & Regulatory revenues declined 7% overall due to recent disposals and the impact of currency. On an organic basis, the division recorded low single-digit organic growth, reflecting portfolio changes, accelerated organic growth at Enablon (included in organic since mid-2017), and a favorable comparison base. The division faces more challenging comparables in the second half, and as a result, we continue to expect the full year to see flat underlying revenue and a stable adjusted operating profit margin.

As of March 31, 2018, the number of shares outstanding was 279.7 million. In the year to date, up to and including May 7, 2018, Wolters Kluwer has repurchased 4.7 million ordinary shares for a total consideration of €200 million. For the period starting May 10, 2018, up to and including July 30, 2018, we have engaged a third party to execute share buybacks for a maximum of €100 million on our behalf, within the limits of relevant laws and regulations (in particular Regulation (EU) 596/2014) and Wolters Kluwer's Articles of Association. Our intention remains to execute up to €400 million of share buybacks in 2018, including the proceeds from the disposal of Corsearch and certain Swedish assets. In addition, we also intend to deploy the proceeds from the sale of ProVation (completed March 9, 2018) towards additional share repurchases of €150 million in 2018 and 2019. Share repurchases will be used for capital reduction purposes or to meet obligations arising from share-based incentive plans.

We reaffirm our full-year 2018 guidance. We expect to deliver solid organic growth and margin improvement for the full-year. We expect to achieve an increase in full-year diluted adjusted EPS in constant currencies and improvement in return on invested capital (ROIC). The first half adjusted operating profit margin is now expected to be broadly stable in reporting currency, reflecting the phasing of investments and savings.

Our guidance reflects the new IFRS 15 accounting standard, which became effective on January 1, 2018. When applied to 2017, under the method adopted by Wolters Kluwer, the adjusted operating profit margin would be 22.2%, diluted adjusted EPS €2.22, and ROIC 9.8%. IFRS 15 has no impact on adjusted free cash flow.

Our guidance is based on constant exchange rates. In 2017, Wolters Kluwer generated more than 60% of its revenues and adjusted operating profit in North America. As a rule of thumb, based on our 2017 currency profile, each 1 U.S. cent move in the average €/$ exchange rate for the year causes an opposite change of approximately two euro cents in diluted adjusted EPS.

Restructuring costs are included in adjusted operating profit. We currently expect restructuring costs of €15-€25 million in 2018 (2017: €33 million). We expect adjusted net financing costs of approximately €70 million (2017: €109 million), excluding the impact of exchange rate movements on currency hedging and intercompany balances. The expected reduction in net financing cost reflects the redemption of our €750 million, 6.375% Eurobond which matured on April 10, 2018. We expect the benchmark effective tax rate to be approximately 26%, subject to further interpretation and clarification of the changes introduced in the U.S. Tax Cuts and Jobs Act.

Capital expenditure is expected to be in the range of 5%-6% of total revenues (2017: 4.8%, including benefit from real estate disposals). We anticipate a cash conversion ratio of approximately 100% in 2018. Our guidance assumes no additional significant change to the scope of operations, although we may make further disposals or acquisitions which can have an effect on margins and earnings in the near term.

Wolters Kluwer is a global leader in information, software solutions, and services for professionals in the health, tax and accounting, finance, risk and compliance, and legal sectors. We help our customers make critical decisions every day by providing expert solutions that combine deep domain knowledge with specialized technology and services.

Wolters Kluwer reported 2017 annual revenues of €4.4 billion. The group serves customers in over 180 countries, maintains operations in over 40 countries, and employs approximately 19,000 people worldwide. The company is headquartered in Alphen aan den Rijn, the Netherlands.

Wolters Kluwer shares are listed on Euronext Amsterdam (WKL) and are included in the AEX and Euronext 100 indices. Wolters Kluwer has a sponsored Level 1 American Depositary Receipt (ADR) program. The ADRs are traded on the over-the-counter market in the U.S. (WTKWY).

This announcement is distributed by Nasdaq Corporate Solutions on behalf of Nasdaq Corporate Solutions clients.
The issuer of this announcement warrants that they are solely responsible for the content, accuracy and originality of the information contained therein.
Source: Wolters Kluwer N.V. via Globenewswire
Wolters Kluwers NV (EU:WKL)
Historical Stock Chart
From Dec 2021 to Jan 2022 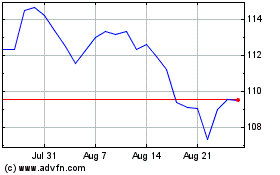 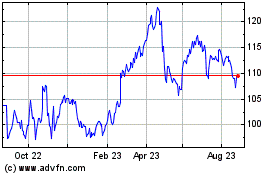 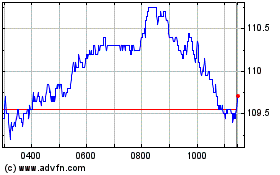