BNP Paribas SA released on Friday its first-quarter results. Here is what you need to know.

NET PROFIT: The Paris-based lender, the country's biggest by assets, posted a 38% increase in net profit to 1.77 billion euros ($2.15 billion), beating analysts' expectations of EUR1.24 billion, according to a consensus forecast provided by FactSet.

REVENUE: The top line also came in above consensus. Revenue rose 8.6% to EUR11.83 billion, better than the EUR11.19 billion analysts had forecast.

--INVESTMENT BANK: Like for other large European peers, BNP's investment-bank unit was boosted by strong client activity in volatile markets. The corporate and investment bank division posted a 24% increase in quarterly revenue, with global markets revenue up 41%. In the same period last year, the bank took a hit in its equity-derivatives unit from companies that canceled their dividend payments. However, analysts note that costs at the division were higher than expected, contributing to an overall miss on costs, and this is likely to be an important issue for investors, according to Barclays. "The cost miss in CIB will also lead to debate as, unlike peers, it was not offset by better revenues."

--PROVISIONS: Provisions for credit losses declined 37% to EUR896 million. This was a key driver of the consensus-beating performance in the quarter.

--CAPITAL: The bank's core tier 1 ratio was 12.8% at the end of March. This is slightly above consensus and was driven by stronger-than-expected earnings, Jefferies said. 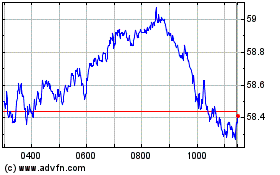