651.01
10.98 (1.72%)
Real-Time
Market Open
651.01
Bitcoin Pound Sterling Volume Soars To ATH Amid Currency Crisis
October 05 2022 - 02:53AM
NEWSBTC
The pound sterling is experiencing heavy turbulence. The dollar is eating it all. Bitcoin is in a deep slumber. What a time to be alive! Things are moving and shaking in the finance world and the general population can’t do much but watch the show. And place their bets. British people recently saw the pound sterling and the euro sink to all-time lows against the dollar. A percentage of the population reacted by acquiring bitcoin, the charts show. Related Reading: Bitcoin (BTC) Dips Below $40,000 Over Ukraine And Possibility Of Fed Rate Hike Another important factor is that the pound sterling’s “volatility last week was highly unusual, creating opportunities and price discrepancies.” The currency crisis created potential possibilities, and British traders seem to have taken advantage of them. As a reminder, the pound sterling saw “a feisty week in the UK pending proposed and later abandoned tax cuts.” This is all according to Arcane Research’s The Weekly Update. In Bitcoinist’s first report on the situation, our sister site said: “The UK’s interest in Bitcoin (BTC) will expand “quite quickly” as fiat currency instability makes the flagship digital currency asset resemble a stablecoin, analysts said. As one of several this week to highlight BTC’s attractiveness over the pound sterling, strategy adviser at financial firm VanEck Gabor Gurbacs came to that decision. “Because of the instability of the pound,” Gurbacs warned, “the United Kingdom will get orange-pilled very rapidly.” The last factor to analyze is this one, “most of the growth was concentrated in spiking volumes on Bitfinex.” Why was that? Keep reading to find out. By The Numbers: The Pound Sterling ’s Busy Week The headline is this one: the BTCGBP trading volume’s 7-day average reached an all-time high this week. Also, surprising no one, “similar tendencies occurred in ETHGBP.” How high was the all-time high, though? Back to The Weekly Update, “BTCGBP pairs saw trading volumes climbing above 47,000 BTC last Monday, after having experienced growth throughout the latter parts of September.” BTCGBP Trading Volume (7d Moving Average) | Source: The Weekly Update As for the reason for the pound sterling to bitcoin movements, Arcane Research’s analysts blame it on “market maker rebalancing.” Although they also recognize that bitcoin is “gaining mind share amidst declining trust in the British Pound.” A similar thing happened to the Russian ruble at the beginning of the conflict with Ukraine. At the time, our sister site Bitcoinist reported: “The new all-time high on the BTCRUB pair is the result of the Russian ruble falling more than 50% against the United States dollar since the start of the year. As the global reserve currency, most financial assets are priced in USD.” Will the pound sterling rebound as fast as the ruble did? Or will the dollar continue to dominate for the foreseeable future? BTC price chart for 10/05/2022 on Gemini | Source: BTC/GBP on TradingView.com Why Was Most Of The Growth On Bitfinex? The analysts at Arcane Research identified another fascinating factor. An incentive, if you will. They named it a “prolonged structural mispricing” and it refers to a “dollar-adjusted premium or discount in Bitfinex’s BTCGBP pair last week.” All you have to do is adjust “the BTCGBP pair to USD,” to see that the pound sterling / bitcoin pair “traded at a significant discount to dollar spot.” This was an effect and not a cause. The market movements created this arbitrage opportunity. People who detected the incentive on time, profited. Related Reading: Bitcoin Shows Resilience In Dollar-Driven Bloodbath | BTCUSD September 26, 2022 “As the GBP bottomed vs. the USD, BTCGBP traded at a massive discount compared to BTCUSD. The discount turned into a prolonged premium with certain wicks deep into discount terrains as GBP traded in a highly volatile environment.” Despite the significance of this factor, Arcane Research still believes that “the predominant force was market makers reducing their exposure” to the pound sterling. Featured Image by Ewan Kennedy on Unsplash | Charts by TradingView and The Weekly Update
Maker (COIN:MKRUSD)
Historical Stock Chart
From Nov 2022 to Dec 2022 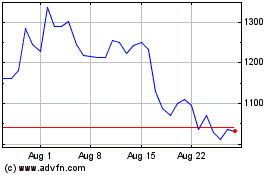 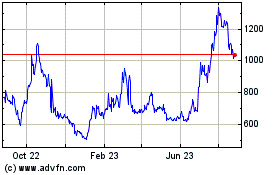 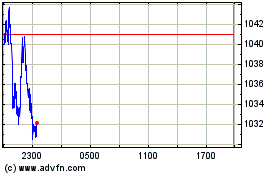