133.13
1.90 (1.45%)
Real-Time
Market Open
133.13
WikiLeaks And Bitcoin: A Crypto Love Story?
December 14 2021 - 06:00PM
NEWSBTC
The story of WikiLeaks and its move to Bitcoin is a popular one amongst crypto investors. When WikiLeaks had first come out, it quickly gained popularity for publicizing news leaks and classified information on its site. Founded in 2006, the not-for-profit organization has had an interesting history, one of those being its founder, Julian Assange, being sent to prison. Even more interesting is the organization’s history with leading cryptocurrency bitcoin. The anonymous whistleblower platform had gotten on the government’s bad side over leaked documents that contained sensitive and classified military information. The organization which depended largely on donations had suffered greatly from this as payments processors like Visa and Mastercard had distanced themselves from the entity. WikiLeaks Turns To Bitcoin After being cut off from traditional methods of payment, WikiLeaks had turned to the next best thing. At this point, the organization needed something that could not be tracked or controlled by the government and it turned to bitcoin donations for this. Julian Assange had accused the U.S. government of endorsing what he referred to as “an illegal banking blockade” against WikiLeaks, forcing entities like AmEx, Visa, PayPal, etc, to stop supporting the organization. Related Reading | Could An Elon Musk Time Magazine Cover Predict The Crypto Cycle Peak? According to Assange, this had spurred the entity’s move into bitcoin. Bitcoin was still relatively new at this point. In 2010, when the ‘blockade’ went into effect, BTC was only a year old and still trading relatively low. That same year, WikiLeaks had begun receiving cryptocurrency donations, which was just bitcoin at first but has since expanded to include other cryptocurrencies. How Well Have Crypto Donations Gone? WikiLeaks has done well in terms of donations. Bitcoin was only trading at a low six cents when the organization began receiving it as donations in 2010. The digital asset has since grown over the following decade to a high of $69,000 in 2021.  In 2017, founder Julian Assange tweeted saying that WikiLeaks’ investments had grown over 50,000% from when they began accepting the digital asset. Assange went further to thank the U.S. government for being the push behind this move. Bitcoin has since grown a further $50,000 since the founder made this tweet. How far Bitcoin has come since the above referenced tweet  | Source: BTCUSD on TradingView.com Presently, WikiLeaks now accepts donations in six cryptocurrencies including Bitcoin, Ethereum, Bitcoin Cash, Monero, Litecoin, and ZCash. This report from CryptoPotato analyzed the history of the various wallets and concluded that WikiLeaks has received over $2.2 million in donations using cryptocurrencies.  Related Reading | Why The Dark Net’s Most Active Market Ditched Bitcoin For Monero However, this excluded Monero donations as the report stated that donations using the privacy coin could not be tracked. Additionally, WikiLeaks also received a donation of 1 CryptoKitties.  Julian Assange is currently being remanded in Belmarsh Prison in London after reportedly suffering a stroke due to stress. The ‘transient ischemic stroke’ was said to have occurred after the High Court overruled a judgment that prevented the Australian national from being extradited to the U.S. Featured image from iStockPhoto, Charts from TradingView.com
Bitcoin Cash (COIN:BCHUSD)
Historical Stock Chart
From Dec 2022 to Jan 2023 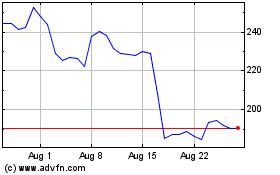 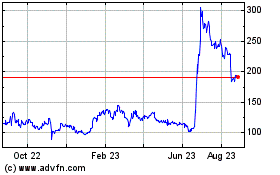 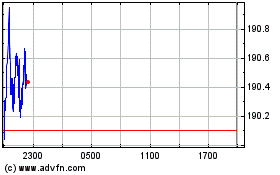